European explorers may not have "discovered" Uluru until the 1870's, but the site has long been a place of spiritual significance for Indigenous Australians, who have lived in the area for more than 20,000 years. Hearing the stories of Uluru and Kata Tjuta's traditional owners, the Anangu people, which have been passes down from generation to generation, and learning about their fascinating culture is a highlight of any visit to the Red Centre.

Tjukurpa is the foundation of Anangu life and society. It refers to the period when ancestral beings created the world, and from this religion, law and moral systems. It tells of the relationships between people, plants, animals and the physical features of the land. Elders have kept this culture alive through storytelling, ceremonies, songs, dance and art for thousands of years.

Uluru-Kata Tjuta National Park's Cultural Centre, at the base of Uluru, is a great place to begin. You enter through a tunnel which reveals several creation stories, and can also hear presentation at 10am daily. The centre is also home to two art galleries. You can see artists at work and ask questions about their creations at Walkatjara Gallery. Maruku Arts showcases traditionally-crafted wooden tools and artefacts, paintings, jewellery, pottery and other crafts by artists from the Central Western Desert region.

Maruku also holds super fun dot painting workshops each morning and afternoon int he Town Square at Ayers Rock Resort. You will learn some introductory words from the local language, Pitjantjatjara, and be introduced to symbols and tools before creating your own masterpiece to keep. 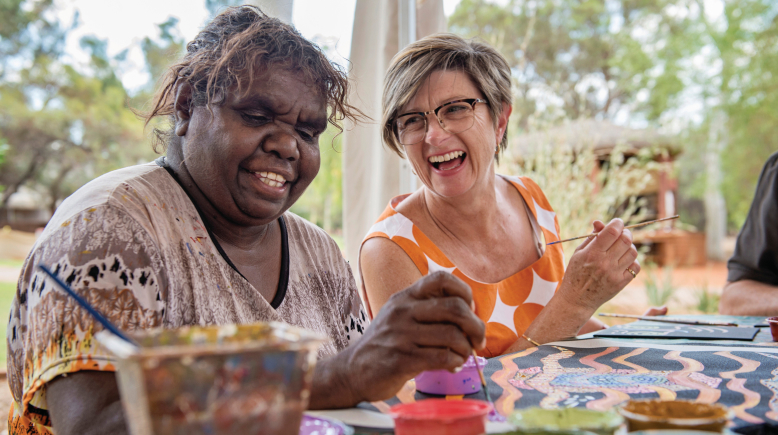 You can also see traditional art, including geometric symbols such as concentric cirlces representing waterholes, figures representing animal tracks and the outlines of animals, in the caves and rock shelters of Uluru on a base walk with an Indigenous guide, who will also share Tjukurpa stories.

If you want to explore further afield, book a full-day small group 4WD tour to Cave Hill, around 100km away, to see paintings on the cave ceiling that tell the drama of the Seven Sisters creation story. Outside, you will be impressed by views of Mount Conner and the imposing Musgrave Ranges, and learn about traditional food gathering.

You can also discover 'bush tucker' ingredients, including flavoursome native herbs, spices, fruits and seeds that Indigenous Australians have been eating for thousands of years, on a guided or self-guided walk through the native gardens of Desert Gardens Hotel.

But whatever you do, don't leave without partaking in one of the amazing outdoor dining in the desert experiences on offer. Try kangaroo and bush tomato crostini, paperbark smoked crocodile frittata and poached prawn with native finger lime at the A Night at Field of Light. Or sip champagne as you watch the sunset over Uluru before dining on wattleseed damper, chicken breast dusted with lemon mrytle and pepperberry sauce, and quandong apple crumble at the Sounds of Silence dinner under the stars. If you prefer a fine dining experience, taste beetroot and Illawarra plum mousse; Moreton Bay bugs with pickled muntries, walnut emulsion and celery cres followed by rosella and lychee petit gateaux on a sand dune at the exclusive Tali Wiru.