“Look, a shooting star!” says one of my dining companions. I’m hunkered over dessert in the desert, eyes down and spoon halfway through a pretty pink globe that tastes of rosella and lychee, but swivel quick-fast hoping to see the astral firework that I always seem to miss. Damn, bad timing once again.

Luckily, there are less elusive objects to admire in the night sky after this haute four-course meal atop a remote dune near the Resort.  After finishing our dinner featuring native ingredients that is a highlight of the Tali Wiru experience, we file back to the fire pit and take a seat around the crackling flames to listen to a star talk from Tyler Baira, whose Torres Strait mob might be far away but share a similar view of these constellations and stars scattered like diamonds above our heads.

Baira, who welcomed us to this spot at sunset with an age-old symphony coaxed from a didgeridoo, now points out a formation that Westerners know as Orion’s belt. He tells us an alternate version – a Yolgnu story about three brothers who went fishing. They could only manage to hook kingfish, part of their totem and something they weren’t allowed to eat, but one brother was hungry and ate a fish. As punishment, a waterspout picked up their canoe, spinning them into the night sky.  For the Yolgnu those three bright stars up there are the unfortunate brothers sitting in their canoe.

“Every Aboriginal story has a lesson,” says Baira. “And the lesson of that story is don’t do wrong by your people, don’t do wrong by your tribe. If you do wrong by them, bad things will happen. Now I’m going to tell you a Creation story. I’ve saved the best for last …” And as we sip our nightcap (tawny port or a hot beverage), we follow his instructions to imagine the earth with no land, only ocean, allowing his poetic words to transport us to another universe. Stargazing talks like this are also incorporated into the Sounds of Silence dinner that this year celebrates its 25-year anniversary. 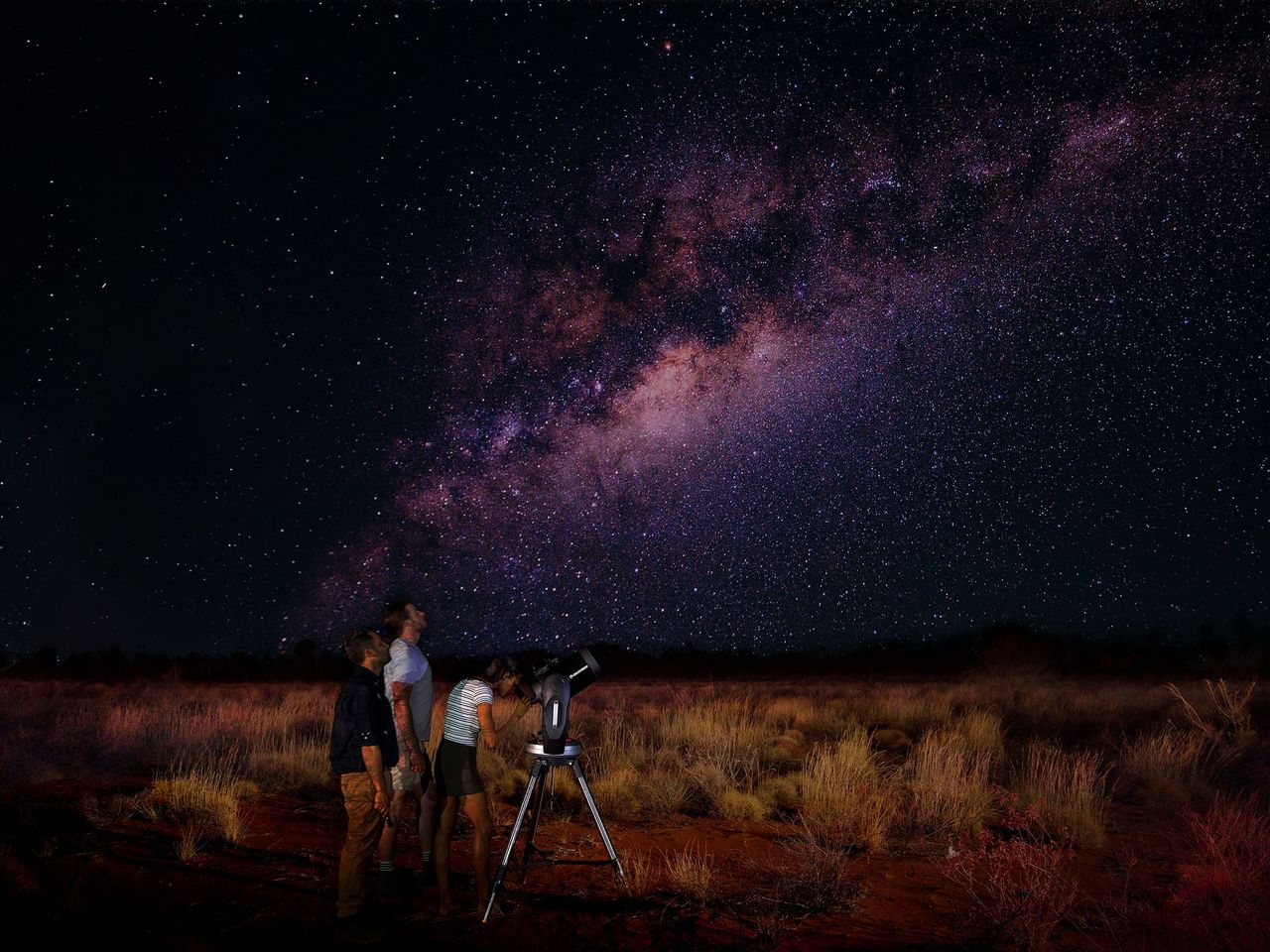 Visiting Uluru might be all about the sunset and sunrise for some but many people come away entranced by what unfolds between those two daily events. They’ve forgotten the brilliance of the night sky when it’s not obscured by pollution and artificial light, and rediscover a delight in the stars.

At Ayers Rock Resort, mini-astronomers can get an up-close peek at the planets via a telescope at the Outback Sky Journeys experience. This family-friendly tour takes place half an hour after sunset; a later (and slightly longer) tour unfolds two hours after sunset.

Amateur astronomers can also indulge in their favourite hobby at a weekend devoted to stargazing. The Uluru Astronomy Weekend (14-16 September, 2018) includes talks on the structure of the universe, dark matter, activities, demonstrations and a Stellar Starlit dinner. No doubt there will be buzz at this year’s event over news that the International Astronomical Union now recognises indigenous names for four stars, including the smallest one in the Southern Cross.

Katrina Lobley is a Sydney-based travel writer who has visited Uluru on many occasions, you can read her work in The Sydney Morning Herald and The Australian.