We are asking everyone to make change beginning with brave actions in their daily lives – where they live, work, play and socialise. It is a time for all Australians to learn about our shared histories, cultures, and achievements, and to explore how each of us can contribute to achieving Reconciliation in Australia.

This year, we invite you learn more about Reconciliation and to join us at our Reconciliation curated movie program at the Arkani Theatre throughout 27 May to 3 June 2022.

Charlie's Country explores the ongoing repercussions in contemporary Australia. Charlie (Gulpilil) lives in a remote Aboriginal community in Arnhem Land, where he and other men of the community struggle with cultural ties in a world dominated by 'white' law and both deliberate and incidental racism.

Adam Goodes was a champion AFL footballer and Indigenous leader. In the final three years of his playing career he became a lightning rod for a heated public debate and widespread media commentary that divided the nation. He publicly called out racism, was named Australian of the Year, was accused of staging for free kicks, and performed an on-field war dance celebration. The cheers became boos as football crowds turned on him. Using only archival footage aired at the time, the film holds a mirror to Australia and is an opportunity to reconsider what happened on and off the football field.

In this special episode, presenters Luke Carroll, Miranda Tapsell and Hunter Page-Lochard give an Acknowledgement of Country celebrating Australia’s first people. The joyful provocations throughout this episode share knowledge of Aboriginal and Torres Strait Islander culture and highlight importance of caring for Country together. The stories, songs, music, dance and creative projects included can extend perspectives around Aboriginal and Torres Strait Islander culture for young children and their families.

House Keeping | 12mins
In this episode Nanna is feeling unwell so Little J and Big Cuz eagerly take over running the house – their way! Fun ways to do housework soon descend into slapstick chaos.

School Sleepover | 12mins
In this episode Little J is anxious about going to the school sleepover, so Big Cuz smuggles in her beloved teddy for comfort.

Early in 2017, Gulpilil was diagnosed with lung cancer. His doctors estimated six months for him but David being David, was always likely to defy the odds. Sadly he passed away late 2021. This was his last great work.

Babakiueria revolves around a role-reversal, whereby it is Aboriginal Australians who have invaded and colonised the fictitious country of Babakiueria, a land that has long been inhabited by ‘white’ natives, the Babakiuerians.

Rabbit Proof Fence tells the true story of Molly, Gracie and Daisy – three Aboriginal girls in Western Australia, 1931 who are forcibly abducted from their mothers. It introduces many people to ‘Stolen Generations’: Aboriginal children who were removed from their families.

An ABC original series, aims to offer insight into the lives of marginalised communities and break down stereotypes while answering the questions people are afraid to ask. Insightful, irreverent, moving and unpredictable. This episode sets the record straight about what it’s really like to be an Aboriginal Australian.

An Australian adventure drama film about a young Aboriginal boy (12-year-old Pete) struggling to maintain the traditions of his heritage in the modern world when a mining company expands into the region. Pete and his grandfather Jagamarra live in a run down drive in theatre. The grandfather continually imparts wisdom of the old ways to Pete.

A spirited 8 year old girl deals with the grief of her mother’s death by forging a bond with a wild emu. This spiritual Dreaming is a bond she will do anything to keep, but one that puts her at odds with the new social worker.

The 1965 Freedom Ride – led by Uncle Charlie Perkins and his fellow students at the University of Sydney – was a significant event that drew national and international attention to poor living conditions faced by Aboriginal people and the racism that was rife in New South Wales country towns.

The remarkable life story of Eddie ‘Koiki’ Mabo; a Torres Strait Islander who left school at the age of 15 yet spearheaded the High Court challenge that overthrew the fiction of terra nullius. 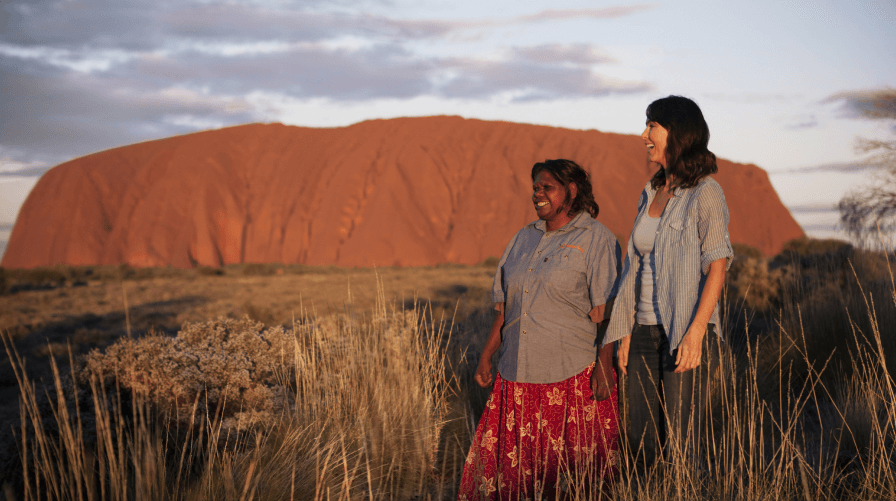 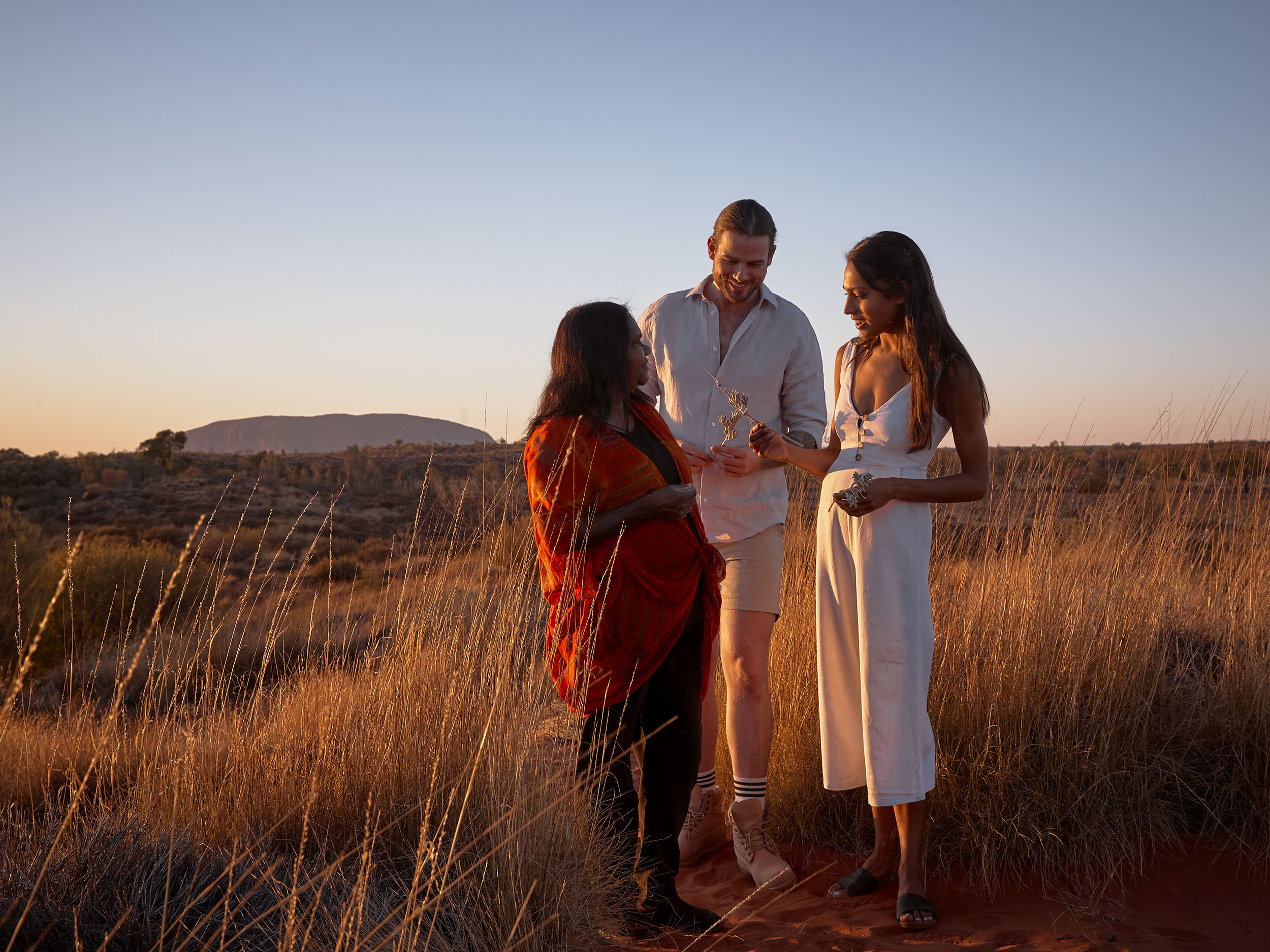 How else can I explore Indigenous culture at Ayers Rock Resort?

As a guest of the Resort, there are plenty of activities and experiences available that will introduce you to the Anangu of the Pitjantjatjara – Yankunytjatjara Country – and many of them are free of charge.

Gallery of Central Australia (GoCA), next to Arkani Theatre: GoCA is a celebration of Indigenous artists from Central and Western Desert community art centres. The sale of every artwork goes back to the artist in their local community. Join us for free daily tours at 10.30am.

Bush Food Experience: Daily 45-minute tours introduce participants to Indigenous bush food, including a cooking demonstration and a chance to sample the ingredients. Daily at 1pm at Arkani Theatre.

Bush Yarns: Listen to the stories of Aboriginal culture and learn about men’s weapons and women’s tools and techniques for gathering bush tucker during this 30-minute experience. Daily at 10am & 10.30am at Circle of Sand at Town Square Lawn and at 3pm & 3.30pm at Circle of Sand at Desert Gardens.

Didgeridoo Workshop: Listen to the sounds of the didgeridoo, an Aboriginal musical instrument from Arnhem land in the Northern Territory. Daily at 11am and 3pm in Town Square.

Guided Garden Walk: Your Guide will show you around the Resort Gardens highlighting the seasonal local flora, bush foods and trees native to Australia. Daily 9am at the Circle of Sand at Town Square Lawn or 4pm at Circle of Sand at Desert Gardens.

Paint Your Own Australian Animal: Paint and keep your own wooden stencilled, native Australian animal. At 10am on Tuesday, Friday, Saturday and Sunday at the Lungkata Room at Sails in the Desert.

See all Indigenous experiences at the Resort or visit our Tourist Information Centre in Town Square.

How can I support Indigenous Australian communities?

The Anangu Communities Foundation was formed in 2003 with a goal of supporting local communities in the areas of health and education as well as economic and social participation. The support of our generous guests and friends has made a number of projects possible, including the construction of an elderly respite care centre, programs for women and children, healthcare facilities and services, and much more. Learn more about the Foundation or make a donation.

What is National Reconciliation Week?

National Reconciliation Week (NRW) is a time for all Australians to learn about our shared histories, cultures, and achievements, and to explore how each of us can contribute to achieving reconciliation in Australia. The dates for NRW are the same each year; 27 May to 3 June.

These dates commemorate two significant milestones in the reconciliation journey – the successful 1967 referendum, and the High Court Mabo decision respectively.

27 May 1967  On this day, Australia’s most successful referendum saw more than 90 per cent of Australians vote to give the Australian Government power to make laws for Aboriginal and Torres Strait Islander people and recognise them in the Census.

3 June 1992  On this day, the Australian High Court delivered the Mabo decision, the culmination of Eddie Koiki Mabo’s challenge to the legal fiction of ‘terra nullius’ (land belonging to no one) and leading to the legal recognition of Aboriginal and Torres Strait Islander peoples as the Traditional Owners and Custodians of lands. This decision paved the way for Native Title.

Reconciliation must live in the hearts, minds and actions of all Australians as we move forward, creating a nation strengthened by respectful relationships between the wider Australian community, and Aboriginal and Torres Strait Islander peoples.

Be Brave. Make Change. This year's theme for National Reconciliation Week encourages all of us to step up, to think about how we can make a change and to take action to make a difference. This is what we will continue to do through the implementation of Voyages Indigenous Tourism Australia's Stretch Reconciliation Action Plan. This plan represents Voyages continuing commitment to reconciliation: To continue to strengthen relationships between Aboriginal and Torres Strait Islanders and non-Indigenous people for the benefit of all Australians.

In just a few weeks, we will be launching our new Reconciliation Action Plan. Stay tuned for more to come.