The Gallery of Central Australia (GoCA) is a treasure of Ayers Rock Resort. Conceived as a place where Central Australian Indigenous artists would have their work featured and careers supported, GoCA now exclusively displays over 350 artworks by emerging and established Central Australian Indigenous artists. In addition to on-canvas art, GoCA showcases specially curated items like Punu (traditional Anangu wood carvings), sculptures, and pieces designed and crafted in local Indigenous communities. These pieces are available for purchase at the Gallery, which results in direct economic support for the local artists. The Gallery also helps amplify the reach of Indigenous art to the rest of the world, bringing awareness of these masterpieces to a broader audience beyond Australia.

Matthew Cameron-Smith, CEO of Voyages Indigenous Tourism Australia, emphasised about GoCA: "It was critically important for us to provide an opportunity for up-and-coming regional artists, many of whom live in remote areas rarely visited by travellers, to have a place to showcase their work and be remunerated fairly and in line with industry standards to ensure an ethical supply chain."

GoCA has started an ongoing Artist in Residence program, primarily running during the peak tourist season. The program's main aim is to host Indigenous artists in the Gallery, creating works on-site and providing guests of the Gallery the once-in-a-lifetime experience of seeing the featured artist at work.

We invite you to read more about some of the artists that have already completed their residencies at GoCA below.

This young and talented artist comes from a long line of creators. Athena's mother, Geraldine Napangardi Granites and her grandmother, Alma Nungarrayi Granites, are also well-known artists who paint with Warlukurlangu Artists. She is also the great-granddaughter of Paddy JapaljarriSims, one of the founding Warlukurlangu Artists.

Warlukurlangu Artists is one of the longest-running Aboriginal-owned art centres in Central Australia. It has been recognised nationally and internationally, with artists being featured in countless exhibitions worldwide. Warlukurlangu means 'belonging to fire' in the Indigenous language, Warlpiri. The name comes from a fire dreaming site west of Yuendumu.

Athena has been painting with Warlukurlangu Artists since 2010. She specialises in painting Jukurrpa from her father's side (Ngapa Jukurrpa – Water Dreaming) while taking inspiration from her mother's side and painting Snake Vine Dreaming and Seven Sisters Dreaming (Ngalyipi Jukurrpa and Yanjirlpirri Jukurrpa, respectively.) These stories relate to her land, the flora and fauna that inhabit it, as well as the land's features. Athena takes a modern approach in her interpretation of her traditions and culture. She uses an unrestricted palette to achieve this. When Athena's not painting, she enjoys spending time with her son, little Henry Peterson Wilson. She also likes to spend the cooler month hunting for honey ants, bush bananas, and kangaroos with her family. 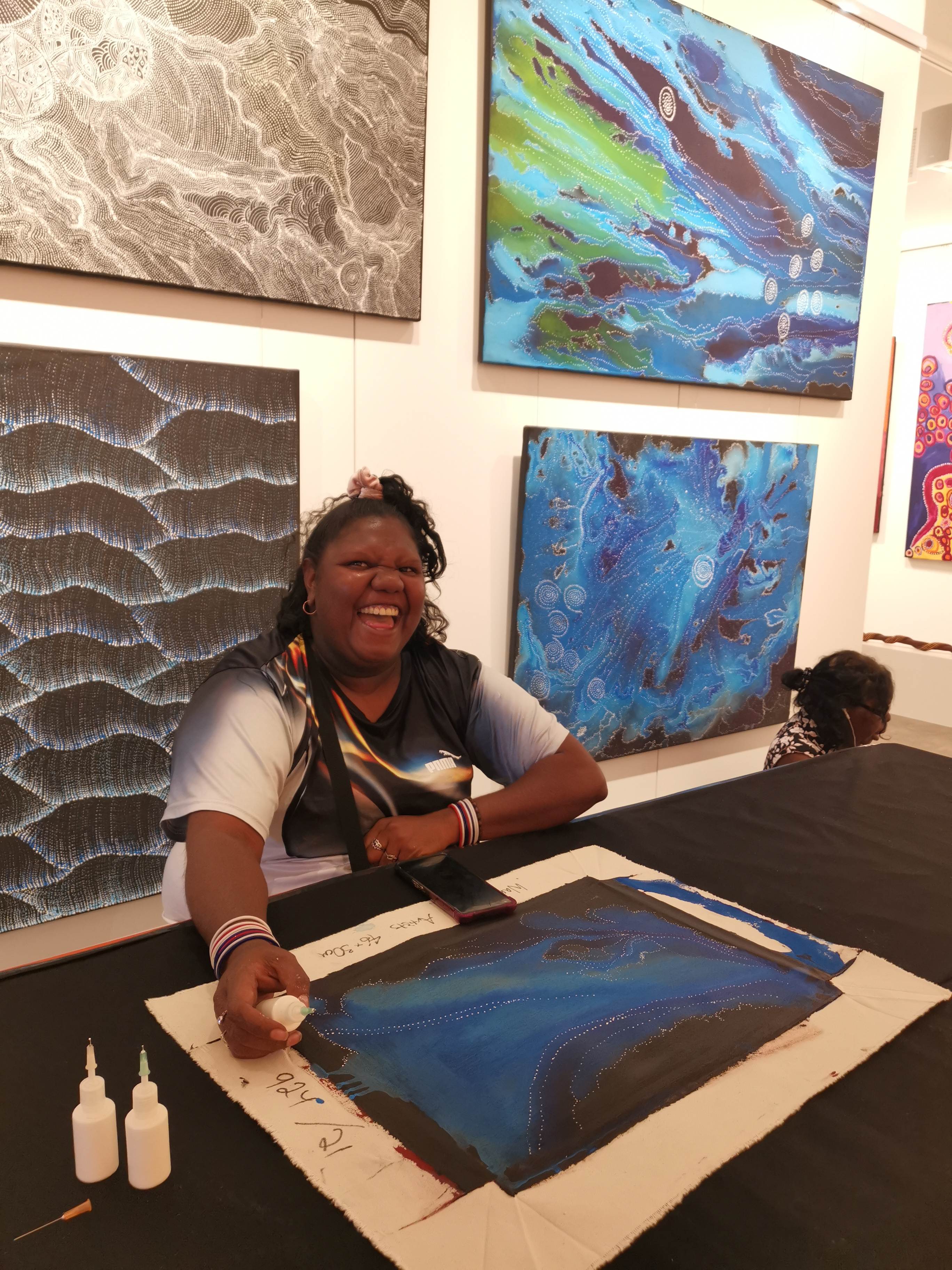 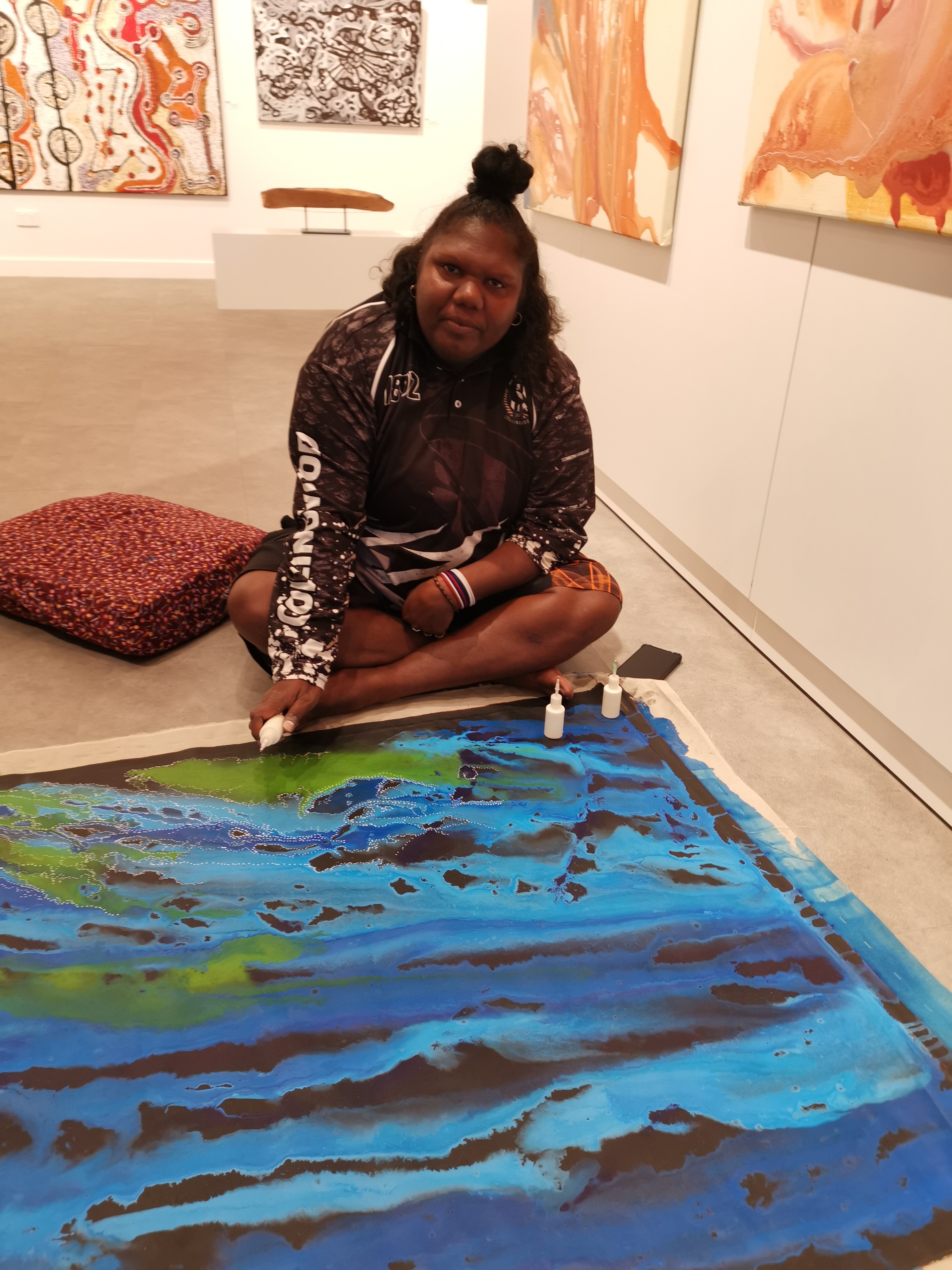 Elsie is an active and vital member of the Yuendumu community. She has worked in many Aboriginal-owned and governed organisations, including the Women's Centre, Women's Night Patrol, The Old People's Program, and the Warlukurlangu Art Centre, where she prepared canvases and paint.

Elsie has been painting with Warlukurlangu Artists since 1987. Her practice focuses on painting Dreaming stories, and she has consistently painted her father's Dreaming (Jayinki Jukurrpa) since 2007. This Dreaming or Jukurrpa is mainly associated with men's ceremonial practices close to Elsie's current community. However, it is also related to important sites for women, where they travelled to harvest bush food. Elsie's work has been recognised and included in several exhibitions of Aboriginal art.

When Elsie is not painting, she dedicates her free time to her family. She has three children, many grandchildren, and one great-granddaughter who she helps bring up. In her community, she also dedicates time to teaching her Dreaming stories, which have been handed down to her from her own ancestors for millennia. These stories are integral to the Indigenous communities that she's a part of and the art that she makes. They relate to her country, community, the land, and all the creatures that live on it. 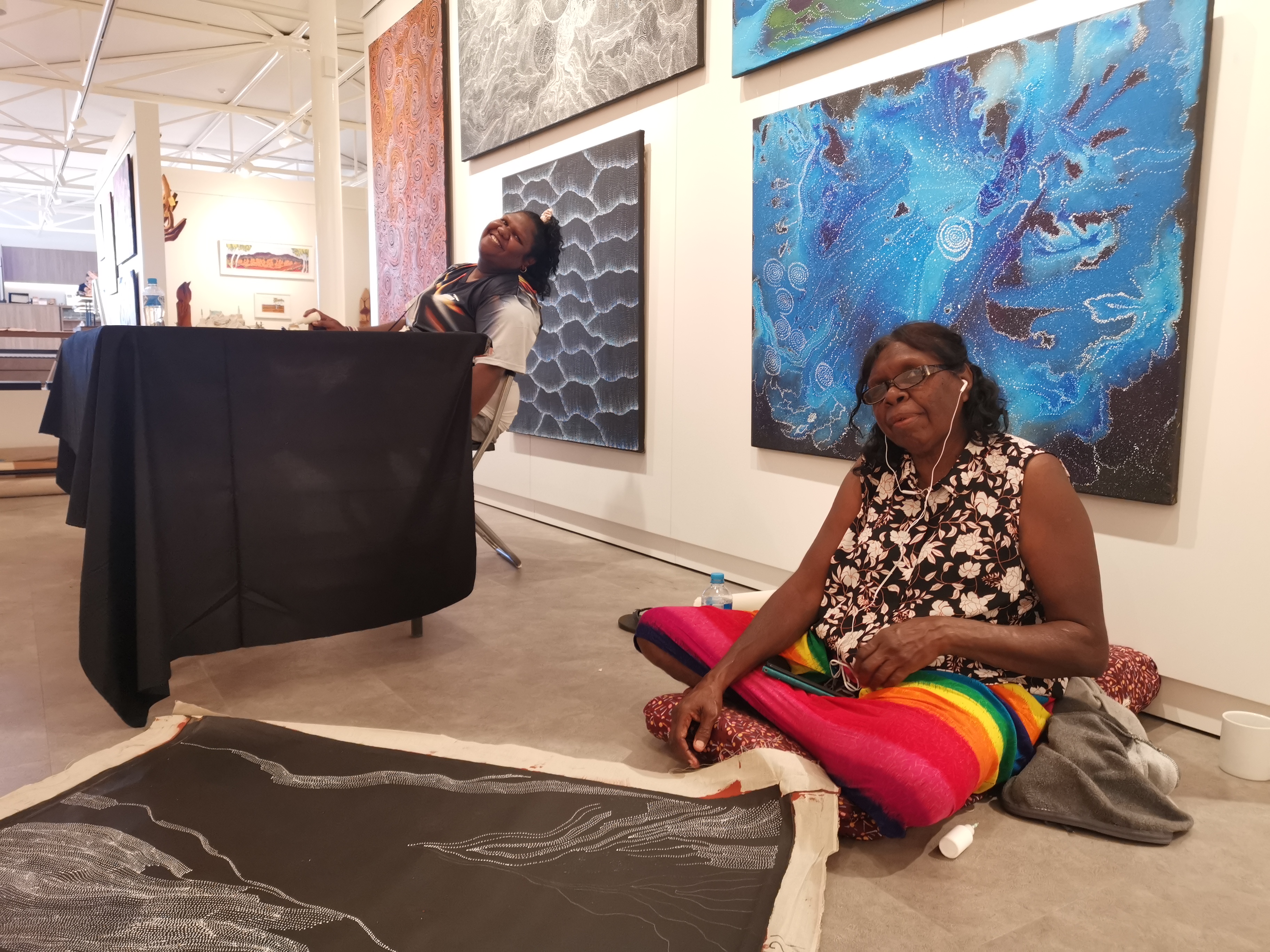 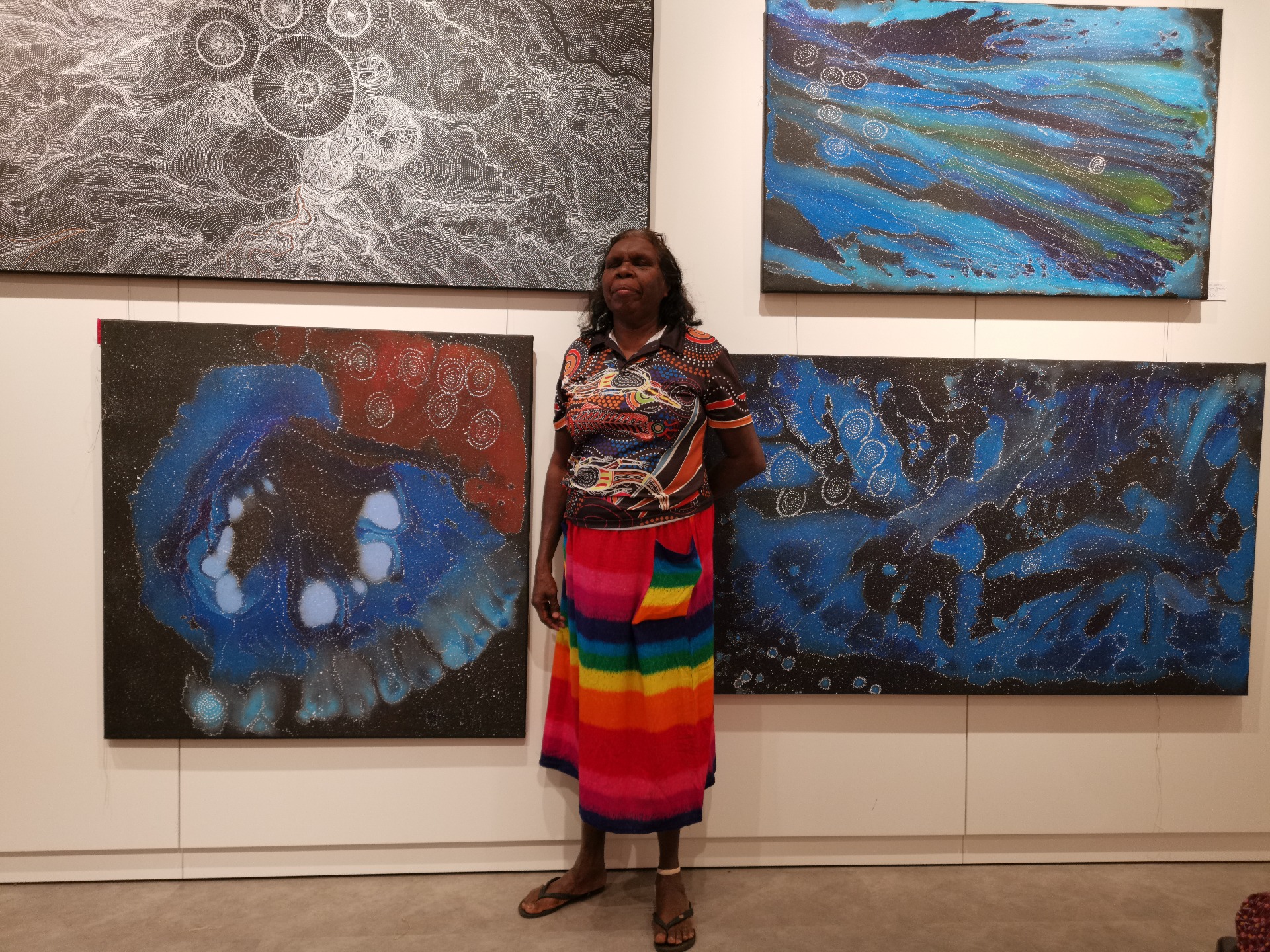 Martha is a senior Pitjantjatjara woman, born and raised in the Australian bush. Throughout her long working life, Martha has been an artist in residence at the Uluru-Kata Tjuta National Park Cultural Centre, a House Parent for Nyangatjatjara Aboriginal College based in Yulara, and an essential senior consultant in traditional knowledge and Indigenous land management. Martha focuses on carving and painting; she is also an artist with Tjanpi Desert Weavers and has been featured in numerous exhibitions. In addition to this, she is a senior law woman and holds important Tjukurpa songs and stories for her country and people. 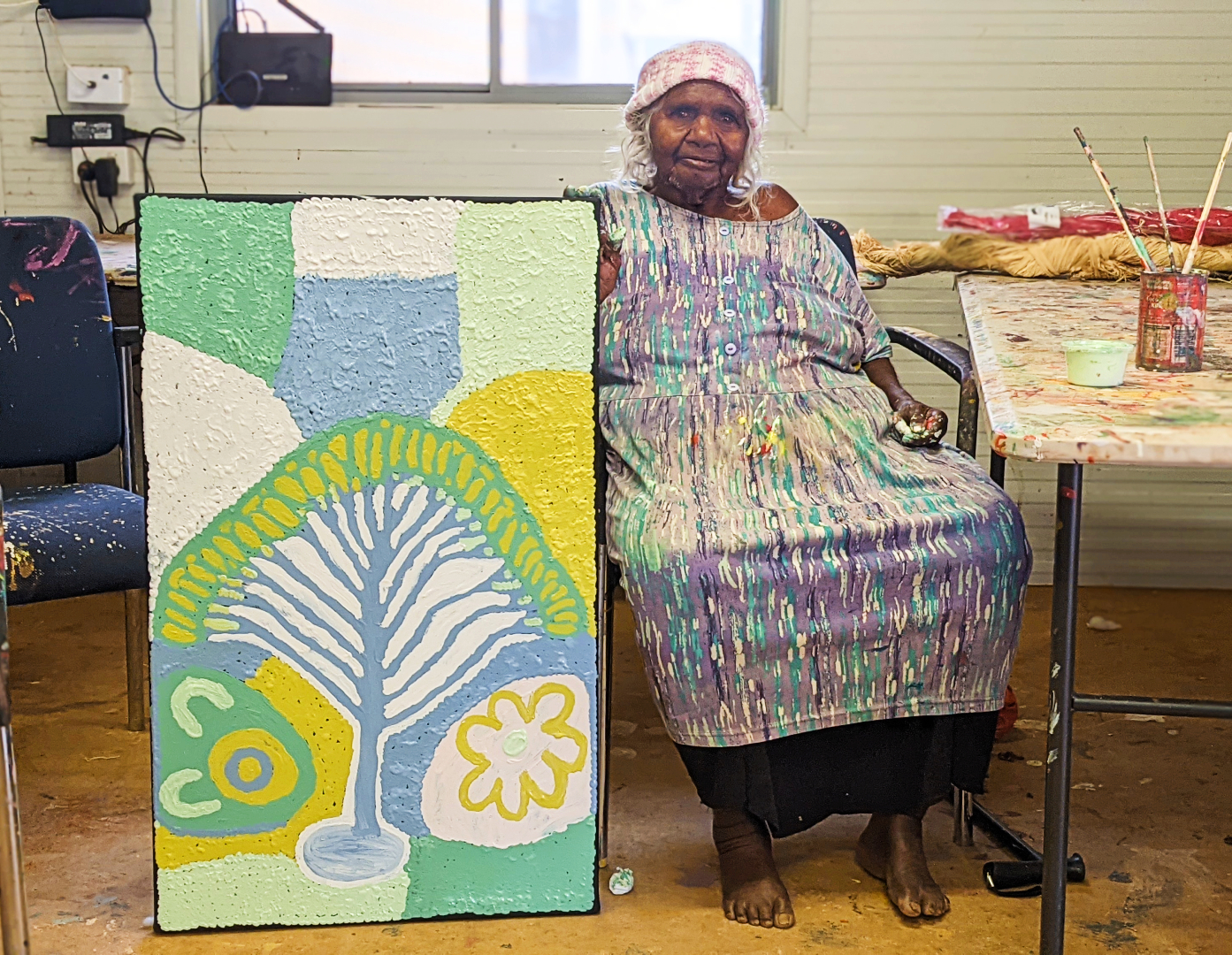 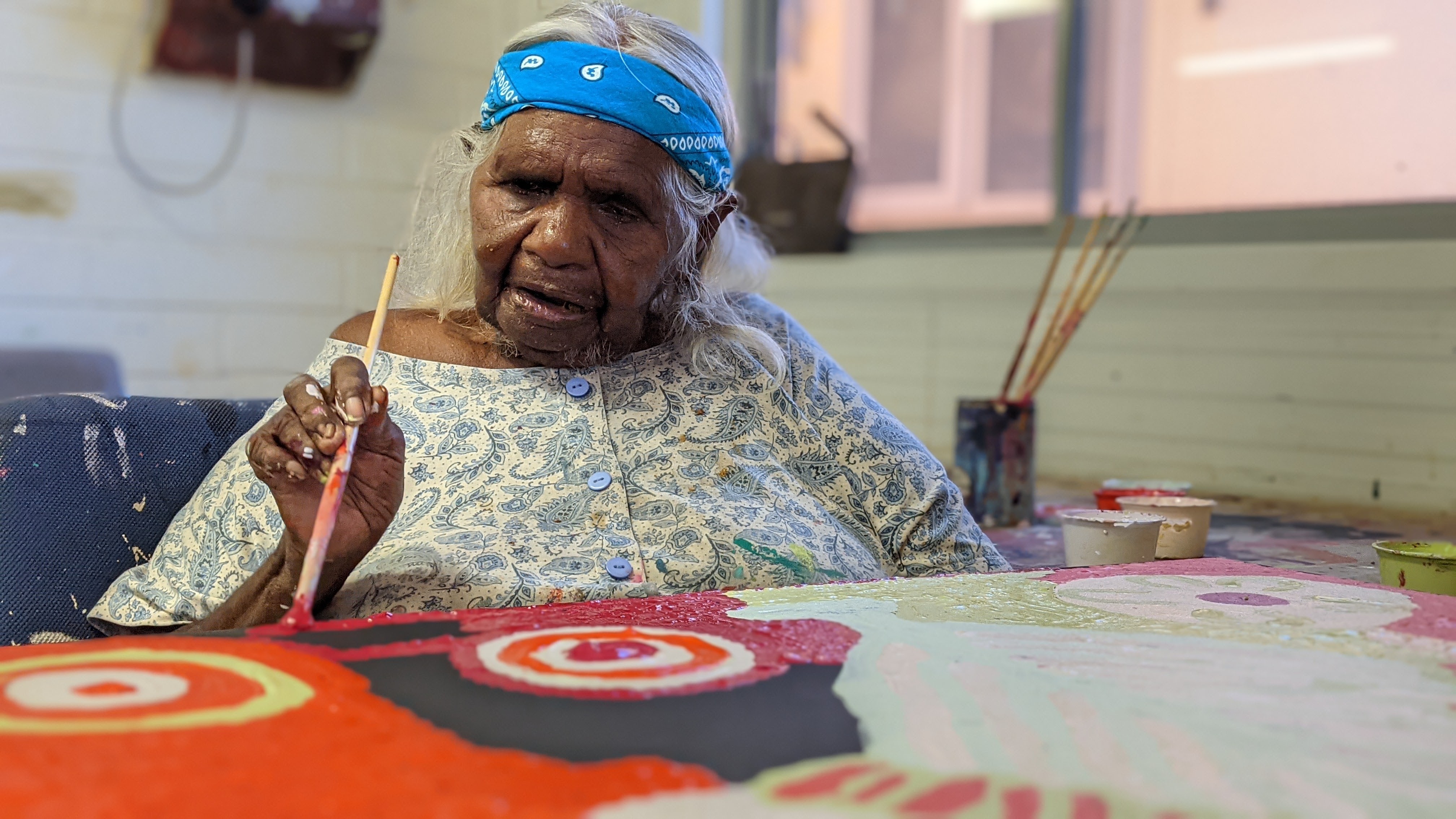 Faith Butler is represented by Tjarlirli & Kaltukatjara Art Centre, which promotes and aims to conserve the art of Tjukurla in the Ngannyatjarra lands of Western Australia and Kaltukatjara in the Northern Territory. This style of Indigenous art has strong ties with the Papunya Tula movement.

Faith lives in Tjukurla, where she paints the stories that have been passed down to her using the traditional Tjukurpa and Tingarri designs. She is also a skilled basket weaver, Punu carver, a well-respected leader in her community, and known for being a knowledgeable Ngaanyatjarra woman. When her community was without infrastructure or services, the responsibility of teaching the children was given to Faith.

Faith's focus on her art practice is the painting of strong women's stories and their culture. 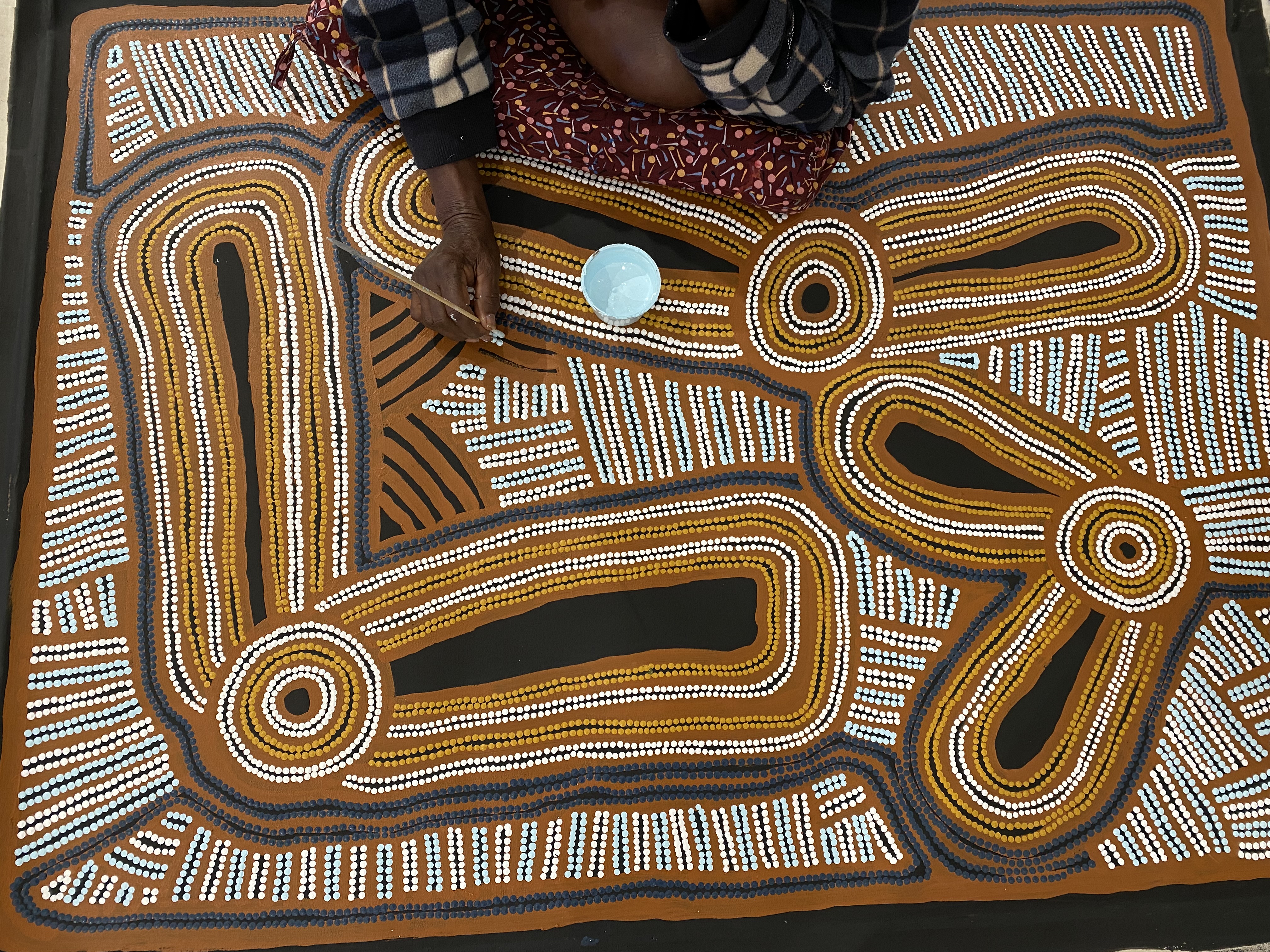 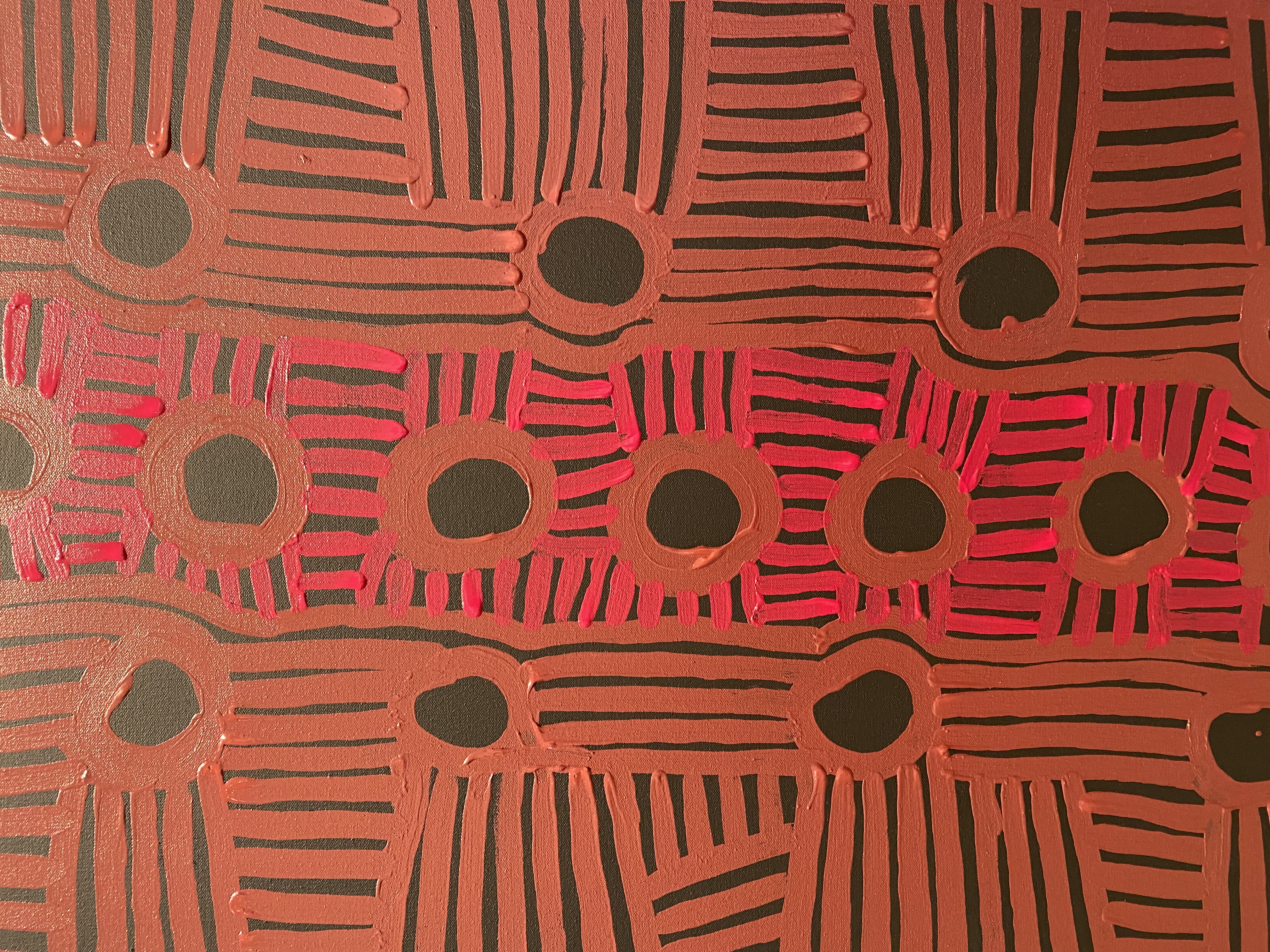 "It's good doing painting in other galleries and knowing the difference, and seeing other places and other art centre's artworks, it's good connecting together. Really good." — Alison Napurrula Multa Pantjiti, Ikuntji Artists.

Alison Napurrula Multa Pantjiti was born and raised in Alice Springs, Central Australia. She is represented by Ikuntji Artists, a member-based, not for profit, Aboriginal Art Centre. Alison is an integral part of her community. She is the vice-president of the Ikuntji Community Council, a teacher at the Haasts Bluff community school, and sits on the regional health board. She dedicates her free time to painting with her daughter, Serianne Butcher.

Alison is an emerging artist. Her practice is focused on experimenting with styles and textures. She is also particularly interested in illustrating stories that stretch beyond her own. Alison enjoys painting stories that expand broadly through desert life, her connection to the landscape and its changing moods, and the harshness and beauty of the land. With a knowledge of Aboriginal law and custom that runs deep, Alison is a modern woman who represents a new up and coming generation of Indigenous artists of Central Australia.

Alison is an emerging artist. Her practice is focused on experimenting with styles and textures. She is also particularly interested in illustrating stories that stretch beyond her own. Alison enjoys painting stories that expand broadly through desert life, her connection to the landscape and its changing moods, and the harshness and beauty of the land. With a knowledge of Aboriginal law and custom that runs deep, Alison is a modern woman who represents a new up and coming generation of Indigenous artists of Central Australia. 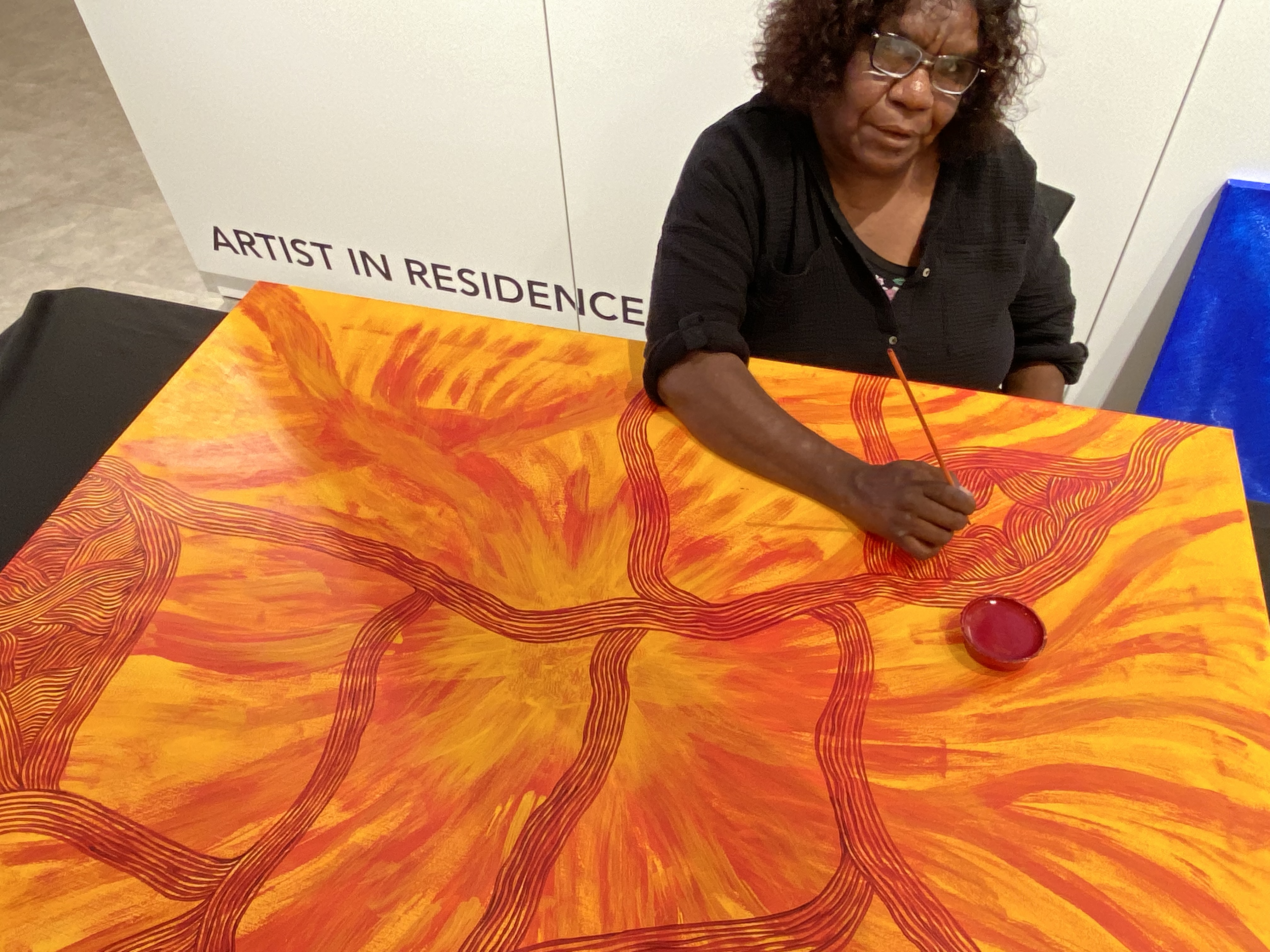 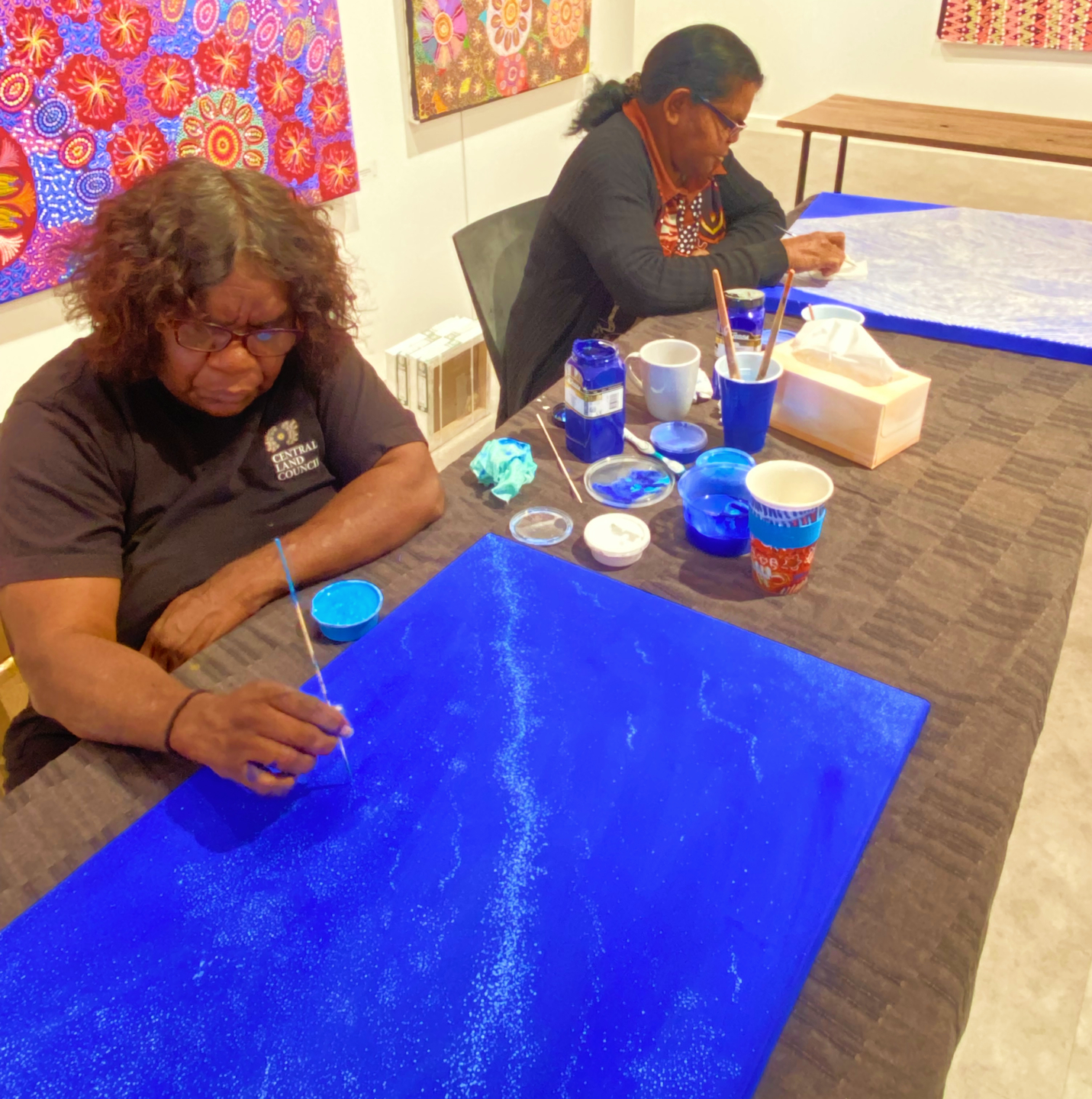 GoCA is located adjacent to Desert Gardens Hotel. The new logo and gallery branding was designed by Kunmanara Brumby, who was a senior woman in the Mutitjulu community, located near Uluru.

Kunmanara Brumby would regularly visit Walkatjara Community Art Centre, where she created beautiful works, often painting the stories of the Seven Sisters, Two Sisters, and stories about the waterholes and landscape of her traditional lands. Kunmanara passed away in 2019, but today, her stunning artwork adorns The Lost Camel Hotel and is on display at GoCA. 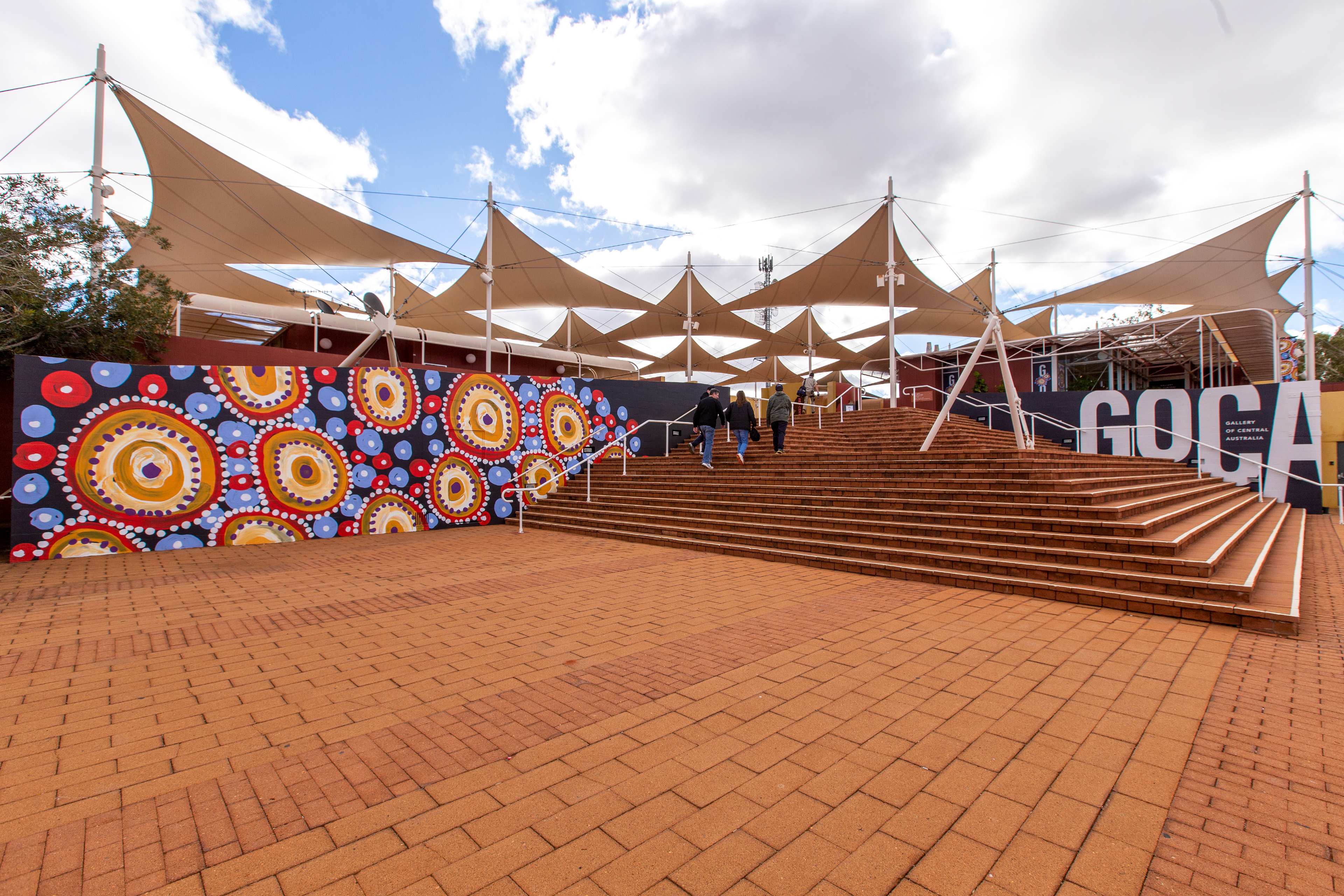 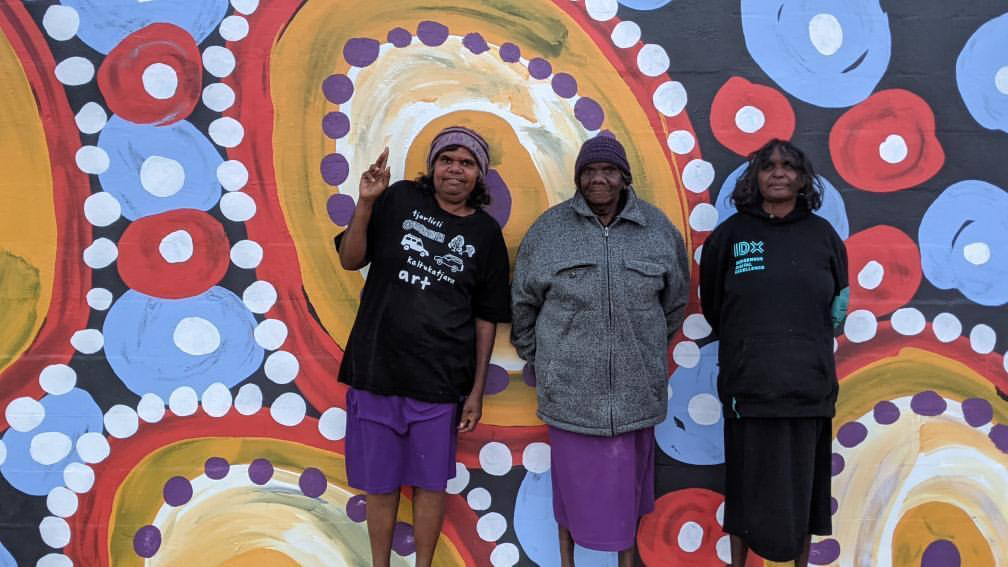 Many other artists have and will be featured at the Gallery of Central Australia and are creating remarkably stunning and culturally relevant art. We invite you to visit GoCA during your stay. You'll be in awe of the detail that goes into these masterpieces and gain a deeper understanding of the rich stories and cultural practices delicately shared through Indigenous art.

We look forward to welcoming you, your family, and friends, at GoCA soon!